Please read this important article about cancer detection dogs. Laurie had the opportunity to intern at the Pine Street Foundation, and saw with her own eyes the dogs sniffing out breath samples in petri dishes of patients with FIRST STAGE ovarian cancer. They have done the same with breast and lung cancer. 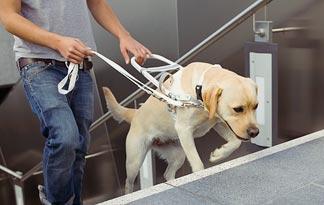 Read on to find out why cancer-sniffing dogs are no laughing matter and learn about the other ways that dogs can detect human health problems.

From our trainer, Cherry, who is working with Laura, who suffers from cancer, recovered congestive heart failure, high blood pressure, Graves disease, anxiety, depression and PTSD. Her SDIT is little “Pumpkin”.

“Laura and her SDIT little Pumpkin are doing really well! Laura puts a lot of time into training her little darling and the results were clear at today’s session.

Pumpkin has mastered her sit and stay at 6 feet! Quite a feat for a little dog that loves to be close to mommy. A tiled floor like Target is great for training because the tiles are exactly one foot in length so its easier to gauge a six foot recall by counting the tiles. Pumpkin is also doing really well with walking with the cart and keeping close to Laura.

Pumpkin is an amazing emotional support for Laura and knows when she is showing signs of anxiety; Pumpkin will jump right up into her lap and reach to wash her face with kisses to ease her tension and it works!

Laura’s homework is to practice Down and Stay, which Pumpkin finds more of a struggle to perform, but with Laura’s determination I know they will get there!!

Laurie had to share a beautiful story about a phone call she received the other day.

A beautiful, compassionate, courageous woman that I met from Houston called to say that she would like to get her white German Shepherd, “Rio”, trained as a Service Dog for her depression, anxiety, and arthritis. She told me the most beautiful story.

Her husband passed away just the beginning of May. They were soulmates. In March, he started losing weight rapidly and his blood sugars started fluctuating. Previously, they had been very adventurous – hiking, sailing, taking cruises – everything – and they are in their late 60s. They had even just returned from a trip to Hawaii, and were ready to settle down, retire, and enjoy their lives.

They took Sia’s husband, Gordon, to the doctor, and he was immediately sent to MD Anderson with the diagnosis of pancreatic cancer. Gordon was British, and had a wonderful sense of humor, but also was reserved when he started feeling ill – not telling anyone. But their amazing dog, Rio, knew something was wrong. When Gordon stopped eating, Rio stopped eating.

Sia realized that Rio needed to be with Gordon. So she brought him to MD Anderson to visit Gordon. Below is the picture of the visit. Immediately, Gordon’s spirits were lifted, as were Rio’s. Sia spent every day with Gordon in the the two months he was hospitalized – until the day he finally passed away. The staff at MD Anderson were so amazed by Rio’s gentle, loving, healing nature, that they asked Sia if she would consider bringing Rio in some day to visit the children in the cancer ward.

It all happened so suddenly, but Sia had so much family support as they had 9 children combined.

Now, she has decided she needs some time alone with her and Sia. She would like Sia, who is 5, to become her Service Dog to help with her depression, anxiety, and arthritis. Of course, we will help train Sia. But I had to share this beautiful story of love – between a husband and wife, and the love between a dog and his person.

From our dear, dear Inuko who is battling cancer. Luckily, her Service Dog Gadget loves her so very much. We are so indebted to her for continuing to share her battles with us – but she is never alone. We love you, Inuko and Gadget! Keep up the laughter!!!

“Last night was another bad night. I had another one of my infamous headaches and was curled up on the bed, exhausted… But Gadget never left my side. When I was frightened from the pain, I curled up around my girl and her breathing calmed me. Its strange, looking back at it… When did this puppy capture my heart so completely? When did she become such an intricate part of who I am? My day wouldn’t be complete without snuggles from my Gadget. She has helped me immensely. My PTSD is still bad, and I am still very sick, but I am surrounded by the ones that love me.

I am also attaching some pictures from our outing to Petco today. We were being goofballs, and Gadget sat there, wagging her tail and making us all laugh. Its so nice to laugh! So I thought I would share my laughter with my SDE family! I hope it helps your day get better. It sure helped me.

With all my love,
Rain (Inuko)

Our beloved trainer, Letty, who is undergoing treatment for breast cancer, had a once-in-a-lifetime opportunity the other day while she was at San Antonio Military Medical Center!! Bradley Cooper, star of the new movie coming out, “American Sniper”, came to pay a visit to the Wounded Warriors at SAMMC. He was accompanied by the actual sniper, Chris Kyle’s, father, Wayne Kyle on January 14th. Letty, who was having a rough day at the hospital, heard that Bradley was there, and they found him! Letty got to talk to Bradley and Wayne intimately – the movie addresses Post Traumatic Stress Disorder in depth – and Letty talked to them about Service Dog Express and how we train Service Dogs for Wounded Warriors with PTSD – and they gave her big hugs and so many thanks!

Another TREMENDOUS training session with dear 24 year-old Alissa, and her SD, Greta!!! Despite all the physical problems Alissa has been going through, Greta is right by her side, comforting her, and conducting herself PERFECTLY in public. Having mom April as a trainer herself doesn’t hurt, but she is smartly determined to give Alissa all the confidence she needs and deserves to show Alissa that she can go out into the world with SD Greta and do a wonderful, amazing job, bringing joy to others and setting a wonderful example of courage and strength. I am SO proud of Alissa and all the work she does with Greta!! This session, we took her to the “dreaded” super HEB at the busiest time possible!! Alissa did it – and was magnificent. So was Greta. We practiced all basic commands in the store – sit/stay, down/stay, several meet and greets – which Alissa is getting more and more comfortable with, perfect heel with and without leash, watch me,

leave it, load and unload – it’s like they are tied together by an invisible “love” bond. Greta is not phased by any distractions I tried to create, and the ONLY thing we need to work on is that at home, when Alissa is feeling ill, it comforts her when big Greta gently wraps her front arms and paws around Alissa. The hugs make her feel wonderful. When we are doing meet and greets, Greta, who loves everyone (but Alissa the most), will do a gentle meet and greet and take treats gently, but as people (mostly children) want to keep petting her, she does a little “bunny hop” because she wants to wrap her arms around them, too. So that is what we will be working on. It’s a tricky one – because we want Greta to continue doing it with Alissa – but not to anyone else. So, teaching her where and when it’s appropriate without dampening her enthusiasm at home is a thinker.

On a side note, you’ll notice a woman in a wheelchair in the picture to the right. When this woman first saw Greta, Greta instantly went up to her and laid her head on this woman’s chest. The woman started crying, and petting gentle Greta. We asked her if she was OK – and it turns out, this woman had literally been diagnosed with lung cancer at the very spot where Greta laid her head. She just cradled Greta’s head and neck in her arms and cried. It was literally something out of a storybook. Greta instinctively knew where this woman was hurting, and brought so much happiness so this woman who said that just meeting Greta brought her out of her despair for several wonderful moments.

That’s what it’s all about. Service Dogs. The intangible “knowing”. The healing power of animals and humans. Please consider a donation to In Dog We Trust, a San Antonio non-profit rescue group that goes above & beyond for clients of Service Dog Express.

“Amongst these pictures is one that I look at and just can’t take my eyes off of… Others, I see Trooper as Trooper and it makes me cry all over again. You can see his pride, his affection, his strength, his warrior attitude in almost all of these, and in the rest of them, you can see how much he loved his Momma.

There is also a picture here of me and Trooper with the Marlin, TX Fire Department. They stopped us and asked for a picture, and then talked with us for HOURS. If I’m not mistaken, they actually have this hanging up in the Fire House now. They said they wanted a copy of it so they could do that. They loved Trooper, and it breaks my heart to know that I have to tell them that he’s passed. I have yet to do that.

no images were found