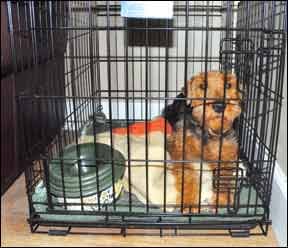 Whole Dog Journal outlines a positive dog training 5-step plan of action when your pup refuses to get in his crate willingly.

5 things to do when your dog refuses to get in or stay in a crate.

Properly used, the crate is a marvelous training and management tool. Improperly used, it can be a disaster. Overcrating, traumatic, or stimulating experiences while crated, improper introduction to the crate, and isolation or separation anxieties are the primary causes of crating disasters. If, for whatever reason, your dog is not a fan of the artificial den you’ve provided for him, and assuming he can’t be trusted home alone uncrated, here are some things you can do:

Every time your crate-hating dog has a bad experience in a crate, it increases his stress and anxiety and makes it harder to modify his crate aversion. Your dog may tolerate an exercise pen, a chain-link kennel set up in your garage, or even a room of his own. A recent Peaceable Paws client whose dog was injuring herself in the crate due to isolation anxiety found her dog did just fine when confined to the bedroom when she had to be left alone.

Many dogs who don’t crate well are delighted to spend the day at the home of a friend, neighbor, or relative who is home when you are not, or at a good doggie daycare facility – assuming your dog does well in the company of other dogs. This is not a good option for dogs with true separation anxiety, as they will be no happier with someone else when they are separated from you than they are in a crate. (See “Relieving a Dog’s Separation Anxiety,” WDJ July 2008.)

Utilize a combination of counter-conditioning (changing his association with the crate from negative to positive) and operant conditioning/shaping (positively reinforcing him for gradually moving closer to, and eventually into, the crate) to convince him to go into his crate voluntarily. Then, very gradually, work your way up to closing the door with your dog inside, and eventually moving longer and longer distances away from your crated dog for longer and longer periods of time. (See “Dog Crating Difficulties,” WDJ May 2005). Note: If your dog has a separation/anxiety issue, you must address and modify that behavior before crate-training will work.

Figure out why the crate is aversive to your dog. If he was crate-trained at one time and then decided he didn’t like it, what changed? Perhaps you were overcrating, and he was forced to soil his den, and that was very stressful for him.

Maybe there are environmental aversives; is it too warm or too cold in his crate? Is there a draft blowing on him? Is it set near something that might expose him to an aversive sound, like the washing machine, buzzer on a clothes dryer, or an alarm of some kind? Perhaps his crate is near the door, and he becomes overstimulated when someone knocks, or rings the doorbell, or when mail and packages are delivered. Is someone threatening him when he’s crated – another dog, perhaps? Or a child who bangs on the top, front, or sides of the crate? Maybe he’s been angrily punished by someone who throws him into the crate and yells at him – or worse. All the remedial crate training in the world won’t help if the aversive thing is still happening. You have to make the bad stuff stop.

If he’s a victim of generalized anxiety or separation anxiety and the crate aversion is part of a larger syndrome, or his stress about crating is extreme, you may want to explore the use of behavior modification drugs with your behavior knowledgeable veterinarian, or a veterinary behaviorist, to help reduce stress enough that he can learn to love his crate. Note – if your vet is not behavior knowledgeable, tell her that many veterinary behaviorists will do free phone consults with other veterinarians.

Of course you can’t take him with you all the time, but whenever you can, it decreases the number of times you have to use another alternative. Some workplaces allow employees to bring their dogs to work with them; you don’t know until you ask. Of course you will never take him somewhere that he’d be left in a car, unattended, for an extended period of time, or at all, if the weather is even close to being dangerous. A surprising number of businesses allow well-behaved dogs to accompany their owners; if it doesn’t say “No Dogs” on the door, give it a try! Your dog will thank you.