From our wonderful trainer, Pat, who performed the Public Access Test with client Brook and her now SERVICE DOG, TATER!!! CONGRATULATIONS BROOK AND TATER! Pat writes:

“Brook and her SDIT, 7 year-old hound/Boxer, “Tater”, are wonderful students!!! This week, I conducted their Public Access Test and they passed with ease! Brook was recently diagnosed with Multiple Sclerosis after over 2 years of evaluations, tests and frustration with the pain and lack of answers. We both knew that Tater’s age would limit his length of service and ability to be a mobility dog. However, Brook hoped he would offer her some assistance – long enough to buy time to find and train another dog. She has rapidly been losing her balance and dexterity, she gets dizziness and weakness, and often drops things.

Our objectives for Tater were for Brook to be able to grab his handle just for some stability, and to teach him to pick up things that she drops, because bending over to do it herself was a risky endeavor. He had never had any formal obedience training, and also had a lifelong playmate that was recently lost, leaving him with a hole in his soul that resulted in sadness and loss of interest in life. He also had never had any interest in retrieving or playing catch or any such thing, so Brook had serious doubts whether we could teach him to pick up items for her.

Brook’s ability to absorb my coaching, her commitment to and quality of practice, and Tater’s willingness to try/do new things, were delightful and rewarding. His obedience training came along smashingly, quickly progressing to almost perfect control on the leash. However, both of us had reservations with his response to click/reward training for the retrieve. He was so keenly motivated by the treats that nothing else, including a toy, existed during the first two weeks of training.

Then, during the third week, the lightbulb suddenly came on! He started picking up a toy and placing it in Brook’s lap on the floor. Then, this progressed to when Brook was seated on a chair! And then, Tater started transferring the knowledge to other toys. WaaHooo!!! He got it! So on the 4th week of retrieve training, we started back on the floor with her keys. That very evening, he began picking up keys dropped on the floor and placing them in her hand while she was standing!

By then we were ready for the PAT, and in Walmart, while performing his new ‘tricks’ (like picking up keys, and “sit-down-stand” in succession on command), I suggested that another important skill would be for him to pick up the leash should she drop it. She agreed, and promptly dropped his leash and told him to ‘get it’. Not only did he get it, but he picked it up by the handle no less, and placed it in her hand! AMAZING! Then, Brook’s husband tossed his wallet on the floor, and on the third try (the first two of which he picked it up), Tater picked it up and gently gave it to her.

Now Tater is a 7 year old pup! He is excited about life, can’t wait to train and do new things, and once and for all puts to rest the ancient adage that “you can’t teach an old dog new tricks”!!!! Congratulations Brook and Tater! Tater, you have a wonderful career ahead of you!” 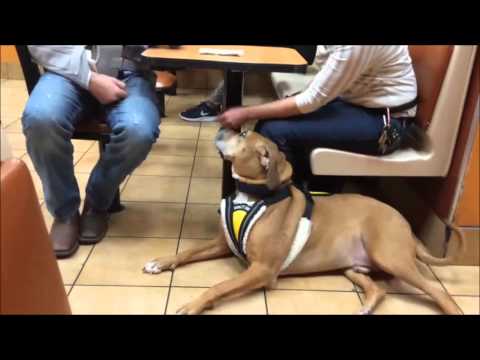